The new Facebook advertising rules (and what they mean for NGOs) 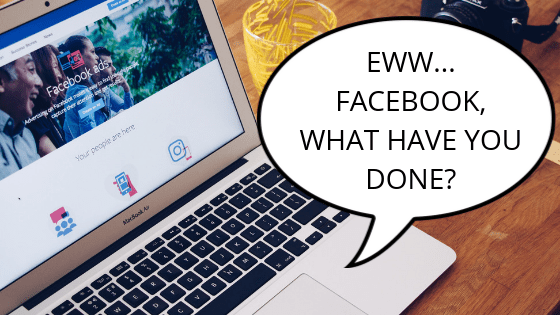 Welcome to WordPress. This is your first post. Edit or delete it, then start writing!

Photo by Will Francis on Unsplash, edited by yours truly.

Facebook is rolling out new advertising rules in Europe and globally and everyone is dreading them (rightly so). So what’s going on? Why is everyone freaking out? I’m obviously going to explain that, thoroughly, with fervour, and in English – for a wider audience.

So, if you are a proficient and prolific procrastinator like me, and you decided to manage Facebook pages for a living (among other things), this won’t come as a shock to you: organic reach on Facebook is not a thing, not any more. If you want to reach your audience, or a wider audience, or anything that basically goes over 3% of your followers, you need to pay. Which is fine, understandable. I mean Mark Zuckerberg has to find a way to fund his Jarvis project and his plans for world domination, right?

This of course means that if you, for some reason, one day, decided to do some good and are managing an NGO or a charitable operation of sorts, you have to take into account advertising budget for specific campaigns that you might want to pursue. This is nothing extraordinary, it’s routine work for many of us. Unfortunately, some of us have the ambition of creating pan-European projects that can be political in nature or by derivation. Ads are an invaluable tool for this type of projects, because they allow to target people by interest or cause, rather than by nationality.

National identity in Europe is still going strong, but the space of the political debate has shifted towards continental debates on a huge number of topics, from environment to finance. These European elections confirm the trend and this has led to a justified fear that they might be targeted by foreign interferences as it happened in other countries before. In fact, it could be said that foreign interference has already been happening in several countries. In general, populists today have a widespread network cooperating with local political initiatives and volunteers, that allow for a more effective penetration in the local political discourse and country-specific tactics of misinformation, infiltration marketing, newsjacking. To counter this, there has been a response from many organisations of civil society, which are participating with their own initiatives and under the umbrella of “This time I’m voting” in these elections to improve participation to the vote.

It’s important to note that there has been an increasing pressure from all the European institutions (specifically from the Parliament and the Commission) to improve the online political debate and protect Europe and these elections from the degrading state of the discourse and foreign malicious interference.

Last week, in a twist that even Stephen King would appreciate, Facebook announced that it would roll out new advertising rules to improve transparency for political ads and explained them through webinars to the interested parties. I was at one of them and I can confirm that the panic was real and immediate when everyone in the (virtual) room realised that they were basically f***ed. To be honest, I was one of the first to freak out.

To put it simply, since this week and across all European countries, it is mandatory that all political advertising contains a disclaimer to declare who is sponsoring the content. All the people who are involved in the process of creating political ads, from the creativity to the targeting and the payment, need to be authenticated through a proof of identity or residence for the specific country in which they are running that advertisement.

If you want, here’s a guide with all the nitty-gritty on how to authenticate yourself an link your profile to a page (thanks Alex!).

So, what’s wrong with this? Transparency is good!

The big glaring issue staring at you: since electoral laws are different for each country, there is no pan-European option. You cannot create political ads for the whole European area, which makes it impossible for small organisations to participate in any pan-European political campaign, let alone the ongoing European elections campaign.

The definition of what constitutes a “political” content is also quite lacking, meaning that it can encompass themes such as the environment if they spark debate, according to the Facebook employee who administered the seminar on the new rules.

I didn’t think it needed to be said, but not many non profits or NGOs can afford to have 27/28 AD Managers with phone number and local credit/debit card. And if even an innocent campaign on single use plastic can be perceived as political, then this strongly limits the ability to make an impact for simple citizens’ initiatives and small activism groups.

Trolls and populists, on the other hand, already have a powerful localised network so they won’t be affected much by these rules.

In fact, they might actually be favoured by them, because now users have the opportunity to report ads that are political in nature and send them back to be reviewed, potentially stopping a campaign. And we all know how good are certain disruptive groups at mass reporting, right?

What about security, though?

Another issue that might be overlooked is that of security. We all know that Facebook’s track record on data protection is not exactly the best, and knowing that it can keep activists’ data for up to seven years and that this data could be hacked, retrieved or even simply shown in the disclaimer.

As I mentioned, not many organisations have such a structured network to be able to afford multiple AD Managers. What they might do, is ask for their volunteers’ help. Of course, not all of them would be comfortable with having their identity shown in a disclaimer, and for them, there is the option to show the main page as a sponsor. In order to show your organisation as sponsor of the AD in the disclaimer, you need contact details for that as well. An address, maybe, a phone number? How many small organisations do you know that have headquarters or even landline phones? So, to protect the privacy of their AD Managers, who could be simple activists who lend their identity to help the organisation, they might have to provide one of the founders’ address or mobile phone number. This won’t be a problem for NGOs or volunteering organisations who act in non-controversial fields, but what about those who are fighting against organised crime or in countries where democracy is not exactly at its best and there is a strong repression of free speech?

On top of that, to be authenticated you have to go through the process while being an admin of the page, further exposing the pages who are owned by non profit to exploitation, hacking, the chance of being stolen, deleted, etc.

Let’s not be naive: these are risks to which we are exposed regardless of the new rules, but at the same time, this whole process creates so many more opportunities that endanger the safety of sensitive data for people who might already be exposed to life threats and violent repression.

To sum it up, it would be easy to blame Facebook for these rules and leave it at that, but I think that what is happening today exposes a much bigger problem that should be solved by the European institutions first, to make sure that it doesn’t get worse.

The new Facebook Ads rules can create issues in terms of accessibility to the European discourse and in terms of security, but the underlying issue to address is the slowness of institutions in acknowledging and taking the lead of a European common public space that already exist de facto, but not on paper. We have a parliament, a “government”, common rules and a common culture, but we don’t have harmonisation of electoral laws and the ability to effectively governing this common space. We have a European spirit, which is not always acknowledged or represented by those who are in charge of our institutions.

Would you ask a company from Utah for authentication in loco to send ads in California? That sounds absurd, right? And it is absurd that our legislation is so behind in acknowledging our Europeanness, that we don’t have a common electoral law and common political parties. It’s time to change.

Any cookies that may not be particularly necessary for the website to function and is used specifically to collect user personal data via analytics, ads, other embedded contents are termed as non-necessary cookies. It is mandatory to procure user consent prior to running these cookies on your website.